It should come as no surprise, especially if you have kids, that the amount of texting for smartphone users continues to increase. 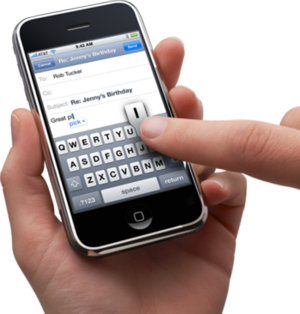 Heavy text users are much more likely to prefer texting to talking. Some 55% of those who exchange more than 50 messages a day say they would rather get a text than a voice call. Young adults are the most avid texters by a wide margin. Cell owners between the ages of 18 and 24 exchange an average of 109.5 messages on a normal day—that works out to more than 3,200 texts per month—and the typical or median cell owner in this age group sends or receives 50 messages per day (or 1,500 messages per month).

Overall, the survey found that both text messaging and phone calling on cell phones have leveled off for the adult population as a whole. Text messaging users send or receive an average of 41.5 messages on a typical day, with the median user sending or receiving 10 texts daily—both figures are largely unchanged from what we reported in 2010. Similarly, cell owners make or receive an average of 12 calls on their cells per day, which is unchanged from 2010.

Comment2 | Share | Tweet | Share | Pin It | Buffer | print | email
Category: bits&bytes
Disclosure of Material Connection: Some of the links in the post above might be “affiliate links.” This means if you click on the link and purchase the item, I will receive an affiliate commission. Regardless, I only recommend products or services I use personally and believe will add value to my readers. I am disclosing this in accordance with the Federal Trade Commission’s 16 CFR, Part 255: “Guides Concerning the Use of Endorsements and Testimonials in Advertising.”

2 thoughts on “Growth of Texting”

As a current subscriber, you can continue receiving TechTips, but only if you want to. The best way is to go to Catalyit.com and sign up to get on the list.

The Catalyit™ TechTips will be published on Tuesday mornings starting next week.

The emails will be coming from Catalyit.com, so if you want to continue to receive TechTips, be sure to safelist this domain.

If you are a solution provider or represent an insurance company and want to explore how we might work together, please reach out to me at Steve@Catalyit.com. I’d love to talk.