I began suggesting that every insurance agency should add multiple monitors to their desktops over 15 years ago. I could see blank stares from the people in the audience. “Why would we do that?” 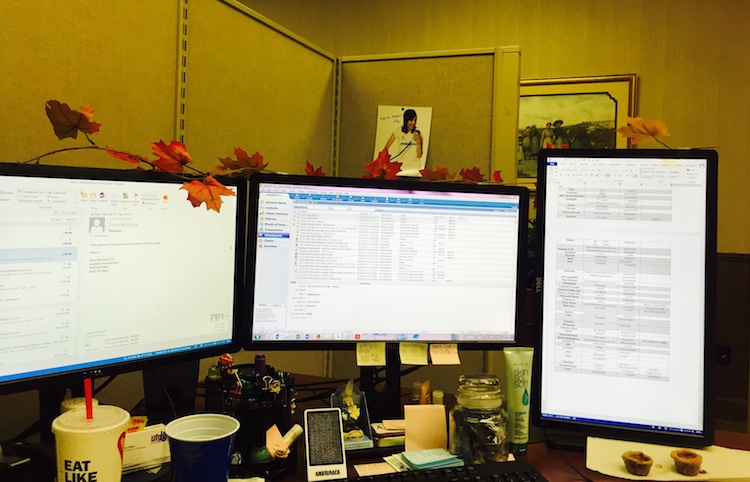 I no longer need to convince agency owners of the wisdom of having multiple monitors on every desk. Today, the questions I receive revolve around fine-tuning the setup, and how many and what type of monitors is optimum.

Following are some of the questions I receive and my opinion on what might be best for your particular situation, or your office. My disclaimer is that your final decision on how to best set up your desk is ultimately your decision based on your personal preference and what will work best for you.

There’s no question in my mind that every desk in your office should have a minimum of two monitors. In addition to desktop computers, any laptop docking stations that you might have set up for temporary employees should have a minimum of two screens. Most laptops sold in the last 18 months have the internal capability of attaching up to three monitors. A docking station simply makes this much easier to accomplish.

I have heard from many agency staff that they have moved from 2 to 3 monitors on their desk. This certainly makes sense for high-transaction positions — typically personal lines and small commercial. These positions often have the need to access multiple carrier websites simultaneously. The additional monitor just makes this that much easier.

A word of caution: I hear many staff say that one of the monitors has Outlook open on it all the time. I think this is a mistake. I do not have time nor space in this newsletter to go into my email management, but know this: email is already a major distraction and having it visible to you all the time just adds to the problem.

One Big Monitor or Multiple Monitors?

Unfortunately, the answer is, “it depends.”

I do not like the one large, wide monitor setup. Most people are very comfortable working in Microsoft Windows, and for power users it will take them more time to size, resize, and move open windows around the single wide desktop for maximum efficiency. Also, once program windows are set the way you like them, your desktop will remember those same positions in the future, cutting down the amount of time you need to set up your desktop to work the way you want.

So the advantage of a multiple monitor setup is that when you maximize a window, it is maximized to the particular monitor where it appears. On a large monitor, the window would maximize to the whole monitor, not necessarily the behavior you would want.

Desk space might be an issue when you have a three or more monitor setup.

Monitor stands help to better manage the amount of space required on a desktop. Typically, monitor stands have one upright stand with a horizontal arm where the monitors are mounted. This allows the user to have access to most of the desktop underneath the monitors for additional workspace.

Another option is to have a cube (or over/under) monitor setup. I do not especially like this setup because I think the ergonomics of needing to look up at the top monitors may become uncomfortable over time. However, the individual’s personal preference should be taken into account.

Another less common option is to use the third or fourth screen as a document display monitor. You can accomplish this by rotating the monitor into a portrait position. The aspect ratio of an 8.5 x 11 piece of paper will fit perfectly to the monitor assuring electronic documents can be more easily viewed and read.

For example, this monitor setup would allow you to see a full page of the document at one time so you do not have to scroll up and down to read the full document. It is also likely that the page will be larger than life-size, also making it easier to understand.

Most agency staff spends hours in front of a computer monitor. Taking some of the suggested steps to enhance the setup of computer monitors further will help improve productivity and, at the same time, reduce ergonomic strains and problems. This is a win for employees and management.

What have you found to be the best setup in your agency for multiple monitors? Let me know.

Comment8 | Share | Tweet | Share | Pin It | Buffer | print | email
Categories: cool tools, opinion, TechTips
Disclosure of Material Connection: Some of the links in the post above might be “affiliate links.” This means if you click on the link and purchase the item, I will receive an affiliate commission. Regardless, I only recommend products or services I use personally and believe will add value to my readers. I am disclosing this in accordance with the Federal Trade Commission’s 16 CFR, Part 255: “Guides Concerning the Use of Endorsements and Testimonials in Advertising.”