If you have been a subscriber to TechTips for any length of time, you will realize that I talk quite a bit about how to use video to communicate and engage with people effectively.

I like spontaneous and a bit off-the-cuff video. Video can communicate in a conversational tone a bit more of your personality. Here is an example from LinkedIn.

But, there are times when a video needs to be a bit more scripted. Perhaps you are doing a training video for staff or an explanation video for prospects on some aspect of detailed insurance policy coverage. You want to make sure the information is correct. It can be hard to remember everything you want to communicate without using some cue cards or a teleprompter.

While cue cards will work, a small investment in a teleprompter can go a long way toward helping you be more natural on camera.

Here is my setup: 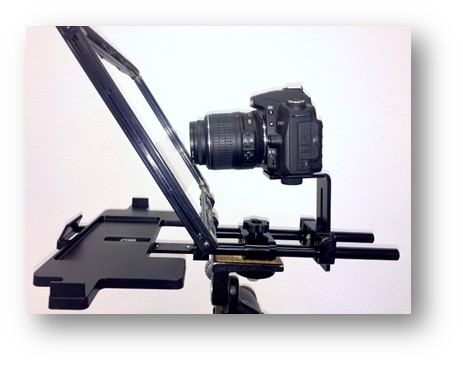 A teleprompter allows you to read the text while looking directly at the camera. You have likely seen them in pictures of large studios. Those teleprompters can be expensive, starting at $500 and going up from there.

I did not want to invest that much money. Fortunately, I found Caddie Buddy. It is a small business that created an inexpensive but fully capable teleprompter platform for $160 including shipping. Add a tripod, a camera, and a tablet, and you have a complete teleprompter system that rivals the most expensive.

The platform is well constructed and has served me well over the last couple of years.

The Caddie Buddy platform works with any tablet or phone—including all versions of iPads and iPhones as well as Android phones and tablets. I currently use an iPad Pro 12.9. I added the PromptSmart Pro App (available for iOS and Android). The app costs $20 and is well worth the investment.

PromptSmart Pro is a “smart” teleprompter app. VoiceTrack speech recognition technology automatically follows your voice as you speak. Other teleprompters use preset scrolling speeds that often require you to speed up (or slow down) to keep up. With VoiceTrack, your script moves at the pace you are talking. I have used this capability many times, and it makes for a much more natural video that does not look like you are reading from a script.

For under $200 you can add a very useful tool to your video studio. Using a script with a teleprompter just might be what you need to produce more video.

What tools do you use in your video studio that have helped you produce better videos?

Comment2 | Share | Tweet | Share | Pin It | Buffer | print | email
Category: TechTips
Disclosure of Material Connection: Some of the links in the post above might be “affiliate links.” This means if you click on the link and purchase the item, I will receive an affiliate commission. Regardless, I only recommend products or services I use personally and believe will add value to my readers. I am disclosing this in accordance with the Federal Trade Commission’s 16 CFR, Part 255: “Guides Concerning the Use of Endorsements and Testimonials in Advertising.”

2 thoughts on “Steve’s Toolkit: How to Record Great Video Using a Teleprompter”