I spend a lot of time talking about generational differences. This infographic from the Pew Research Center is very interesting. It shows the results of a survey they conducted looking at generations and the gadgets they own. Click on the graphic to get the full details… 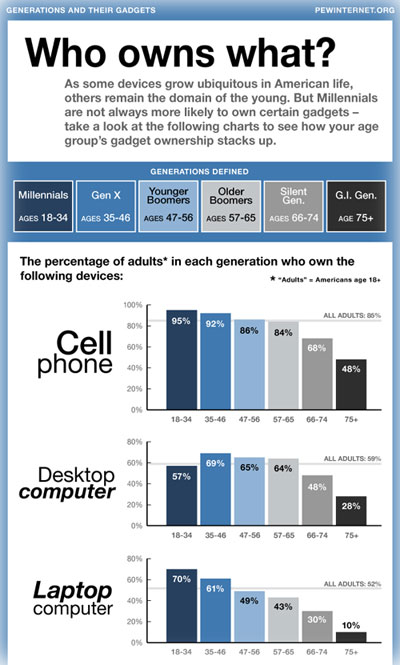 Click on the graphic to get the full details…

Mobile devices and the apps people use with them are changing how consumers interact with information. The programming and development trend of creating small apps that accomplish a specific function will also change how business programs are developed.

Facebook is easy to use, and it’s a robust tool. Grandparents can browse pictures of their grandchildren in a matter of minutes, while teenagers manage their entire social lives from the site. Furthermore, Facebook is free. So why isn’t agency software more like Facebook?

The insurance industry is not known for fast innovation. Yet all of us are competing in an environment where apps developed for the consumer and small business market are innovating at a breakneck pace. As a result, we’re seeing more and more of those consumer tools finding their way into the workplace.

In the not-too-distant future, agencies will be able to purchase only the apps that they want for their organizations. These apps will accomplish a single purpose and will communicate with one another. There will be an app for customer information, one for policy detail, one for claims administration, one for mobile access for both producers and clients, and who knows what else. The list of apps will only be limited by the imagination of users and developers.

Instead of having to purchase one monolithic expensive program that does everything for everyone, agencies will be able to build their own customized products that do exactly (and only) what they need.

Here are some lessons that agency system vendors need to learn from the vibrant and innovative consumer Web apps market.

Part of the problem also lies with how agencies tend to adopt new tools. The ease with which information can be shared on a site like Facebook can run counter to many organizations’ internal cultures. The mindset of an agency (and the rest of the industry) must change from being rigidly hierarchical and siloed towards being more open, flat, and transparent. Companies now have the ability to change the way their employees work.

What can you do? Begin to understand apps by personally using an iPhone or Android-based smartphone, or use a tablet like an iPad or Galaxy Tab. Unfortunately, a BlackBerry doesn’t count, as its apps are so universally poor. As you start using apps, you will begin to understand the transformation taking place.

IBM Labs has released its 5th annual “Next Five in Five” – a list of innovations with the potential to change the way people work, live and play over the next 5 years. The Next Five in Five is based on market and societal trends expected to transform our lives, as well as emerging technologies from IBM Labs around the world that can make these innovations possible.

Here is a 3 1/2 minute video talking about each of the five.

Go to your agency’s Web site right now. Look at the home page. Put yourself in the mind of a random person who doesn’t know your agency from any other agency. Now look at the page and ask yourself, “What is it they want me to do?”

If you can’t immediately answer that question, your Web site needs work.

Most agency Web sites were originally created in the late 90s as a response to the growth of the Internet and search engines. Many people, including myself, said that an agency needs to have a Web site so that they have a presence on the Internet. In response to this, most agencies had a Web site created that was simply an electronic version of their printed agency brochure.

I would argue that even the term “agency Web site” needs to change. In today’s hyper-connected world, you need to create a strategy for your “online presence,” not just your “agency Web site.”

Your online presence will include a combination of multiple Web sites, an agency blog, a Facebook page, a LinkedIn presence for all producers and staff, a Twitter account for customer service, a YouTube channel for agency videos, Google Places for local search, and who knows what else in the next few years.

Along with Duke Williams, I have created the Agency Internet Boot Camp as a way to help agencies understand how to create a strategy for their “online presence” and how to start implementing that strategy.

While content is still what gets people to interact with you, it’s also your ability to interact with customers and prospects via heightened functionality that kicks off the process of engagement — the new success metric. It’s not enough for your content to simply be there, flat and uninviting. It has to stand up and practically beg people to interact with it. Your Web site must be more Web app-like than browser-like.

What does this mean for your agency, you ask? Here are a few thoughts:

Having an agency Web site is just not enough anymore. Creating a comprehensive strategy that integrates all aspects of your online presence will help you become more visible to prospects and to retain clients.

A recent post by Chris Brogan is a good reminder that the social web can be addicting. “Just because you can connect to a lot of people does not mean it is very sustainable.” Listen to Chris’ thoughts. It’s only 1:30 minutes long.

So what about you? Are you connecting just to connect? Or, are you really working on your business?